“Our biggest barrier to change is our success,” declared a senior executive during one of my ‘Leading Change’ workshops.

When you are the market leader; when revenues are growing year on year; when shareholders are ecstatic and when your company’s performance and your personal pay packet continues to bulge at the seams – where is the incentive to change?

Only a madman would even think about rocking that boat.

And yet rock you must. 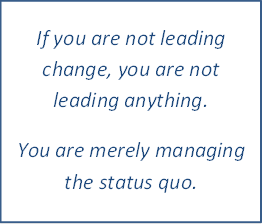 History is littered with companies that succumbed to complacency – the fatal disease that only infects the successful. Kodak, Blockbuster, Lehman Brothers, too many retail banks to mention, AIG, TWA, Ansett Airlines, Woolworths (both the US and UK varieties), … this list could go on and on. Each one could not – and perhaps would not – see the seeds of their ultimate destruction. It isn’t arrogance (per se). It is the inevitable consequence of market-dominating success.

I dedicate a whole chapter to this in the book. Dr Clayton Christensen’s multi-million-selling ‘The Innovator’s Dilemma’ (HBR Press 1997) documents the phenomenon in even more detail.

The sense of infallibility within highly successful organisations can be intoxicating, but it is also stultifying. Inevitably, a culture develops that simply discourages change.

Even if the leadership intends to promote change and innovation, the company’s very success often holds people back. “The odds of my new idea making us even more successful are so slim – and a risk that very few of us are willing to take,” admitted another delegate at the same workshop.

How to break out of this self-perpetuating and self-congratulatory loop?

Step 1: Acknowledge the problem – before it becomes one.

This requires humility (a trait of truly great leaders), awareness and a genuine desire to leave your business in greater shape for the next generation of leaders. This sense of stewardship is very rare in the world of business. The best example of it that I have witnessed in recent years is in the leadership of Wellington, a trillion dollar asset manager based in Boston whose leadership team live and breathe stewardship – not only because it is the right thing to do, but because it delivers superior long-term shareholder returns.

Step 2: Engage your people into action. After genuine acknowledgement of the problem, you can then move into action mode. Here are some options for you to consider.

Make continuous improvement a core part of your company’s DNA

Change doesn’t have to be large and disruptive to be effective. The most effective and sustainable changes are often evolutionary rather than revolutionary. Every leadership team needs to help their people to embrace an attitude of continuous improvement – and empower them to act upon it. Give them explicit and implicit permission to look for, and implement, ways to improve the business – ways to improve the customer experience, streamline processes, improve the office environment, … Your people are the ones who are best equipped to do this. Let them. Encourage them to make changes, allow them to fail and celebrate the successes loud and wide.

Allow your people to (constructively) question the status quo.

Then go one step further and permit them to ask, “Is there a better way?” This is where your newer employees will add the most value. Allow them to (constructively and respectfully) query the way things are done. The Founder and CEO of Intel, Andy Grove, used to take his leadership team out the front door of the office and then ask them to walk back in “with fresh pairs of eyes” – looking for opportunities to change and improve the way the business works.

But be on the lookout for the ‘fear of blame’ among some of your long-serving team members. They will be offended and threatened by newcomers asking heretical questions such as “Why?” and “What if?”. As leaders you will need to provide air cover for the new catalysts of change and remind old hands and newbies alike that they are all trying to achieve the same thing – long term success for the organisation.

Ask yourselves, “What could possibly go wrong?”

You can call it risk management if you like but I prefer to keep it simple. Pausing to contemplate ‘what could possibly go wrong?’ and honestly answering the question will pay enormous dividends. After all, your competitors are already asking themselves how they can eat into your market share. If you were one of your competitors, what would you do …?

Market dominators find it impossible to cannibalise their core business – strangely enough! Of course this is precisely what your competitors are attempting to do to you. So why not set up a competitor? Imagine that you are a highly successful wealth management company that does all of its business through financial advisers. 90% of your end clients are therefore aged 45+, for the simple reason that this is where the money lies. You know that people younger than this tend not to use financial advisers and we are all increasingly going direct. You can’t do this yourself as it could affect your share price and alienate your advisers. What should you do?

One solution would be to establish a completely separate business focused on providing robo-advice direct to investors – one in which you hold a minority stake and the rights to a) use the technology and b) become a majority shareholder in the future. Another solution would be to invest in one. But whatever you do – keep it separate.

If you don’t wish to start a disruptive competitor, then you need to manufacture a ‘burning platform’ for change within your organisation. The All Blacks did this back in 2010. They went into full crisis mode after they lost two of their four games in the Tri Nations championship and ended up last at the end of the competition. (The fact that Australia and South Africa also only won two games was deemed to be irrelevant.) Before they had a chance to lose their coveted position as Number One team in the world, they instigated a major structural and cultural overhaul of their team and the entire organisation that makes the All Blacks great.

They have remained number one ever since.

Remember: Stewardship is everything

Whichever option you choose, remember one thing: The legacy of great leaders is that they leave their businesses in better shape than they found them.

As the leader of a market dominator, this will be tough – but this is the task you have been handed. For if you merely manage the status quo, the business will ultimately fail.  You need to lead change.

As the All Blacks say: “When you are on top your game, change your game.” *